LOVENKRANDS ASKS RANGERS NOT TO BE FIXATED ON CELTIC

Rangers legend Peter Lovenkrands has asked the players of the club to focus on playing in the final of the Scottish Cup as against being fixated on ending the unbeaten domestic run of their rivals Celtic FC. 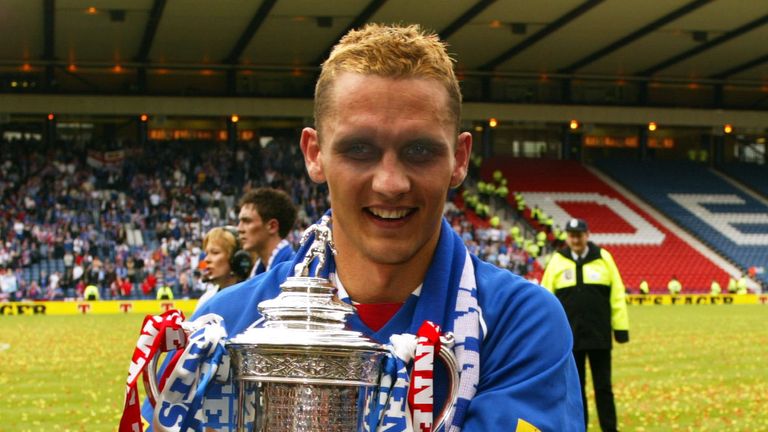 There has been so much noise about the unbeaten run of the Brendan Rodgers-led side as they have lost any local game this season.

Celtic would have to lose the game if Rangers are to progress in the tournament. So Rangers are hoping to be the one to end the party but the former Ibrox star, who sunk Celtic in the last minute in the 2002 Scottish Cup final, is advising them to focus on reaching and winning the final.

“I don’t think it’s anything to do with being the first team to beat them. With the Old Firm, you have to win. If you are playing for Rangers, you have to go and beat your rivals and Celtic will say the same. I don’t think anybody would be looking at it from a Rangers point of view, that we want to be the first team to beat them this season. You need to approach every game to win it,” Lovenkrands cautioned.

Lovenkrands played for six years for Rangers where he grabbed the late winner in the Scottish Cup final of 2002. He repeated the feat the following year in the League Cup where they humbled their rivals 2-1 at the national stadium.

Lovenkrands said he would like to see a new hero emerge when both sides meet on Sunday.

“I would hope someone could come out and grab that chance. I grabbed my chance and these things happen in Old Firm games. It happens for Celtic players, like Henrik Larsson, he did fantastic scoring goals against Rangers. You get your chance and it is about grabbing it and hopefully someone will go and grab the headlines,” he said.

In addition, he praised the change in Celtic from their managers to their style of play.