RANGERS WANT A DIRECTOR OF FOOTBALL AFTER WARBURTON’S EXIT

Rangers are set to appoint a director of football after confirming that they accepted the resignation for manager Mark Warburton. 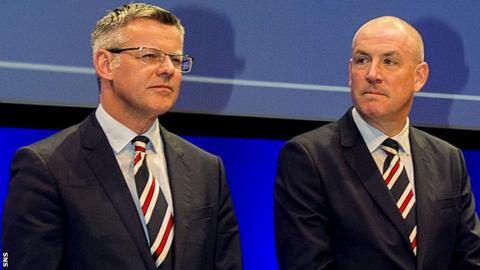 The coach has denied resigning from the role but the club’s management insists that the role was vacant.

The managing director Stewart Robertson revealed that the club has not done any interviews for a replacement, adding that they “want to be a modern football club.” The Under 20 team coach Graeme Murty is the interim manager of the senior side.

“We see that sometimes when managers leave, a lot of the structure leaves with them. That is no use, you put a lot of time, a lot of investment and a lot of resource into developing that side of the business and you can’t have that changing every time a manager changes.

“The director of football gives you that continuity. They oversee the overall football department, all aspects of it, including the academy, performance and preparation, analysis and everything as well as the first team,” Robertson said, trying to justify the choice of director of football.

Reports linked St Johnstone manager Tommy Wright and Aberdeen coach Derek McInnes to the job but both coaches have downplayed them. Former Rangers coach Alex McLeish has admitted that he would like to return to the club. Some reports claim Murty would manage the team until the summer when Frank de Boer could take over.

Rangers have reached the quarterfinals of the Scottish Cup but seem to have given up on the Scottish Premiership with Celtic 27 points ahead.

Robertson said Murty was “a very capable interim manager” who would excel in the role until “the foreseeable future.

“The target is to finish as high as we can in the league, which realistically is second place. Obviously we would love to win the Scottish Cup this year as well as that’s a very clear goal that we will set the team,” Robertson ended.

« Rangers Fans Will Find It Difficult to Accept Current Position, Says Dalziel
LOVENKRANDS ASKS RANGERS NOT TO BE FIXATED ON CELTIC »